As stated in the Mount Zerin Ministries’ Statement of Beliefs:

As part of our mission to serve God and His children, we are working on different projects to fulfill these beliefs.

Hyperbaric chambers are a revolutionary device that mimic part of our earth’s ancient environment as alluded to in various ancient scriptures.

Genesis 1 and 2 tell the story of creation, and it says things that are at odds with what modern people believe to be true of the world and universe around us. One of these things concerns the second day of creation (Genesis 1:6-8), where God made the expanse or the firmament. The Hebrew word for this is raqia (pronounced ra-KEE-ah). Some biblical scholars understand the raqia to be a dome-like shape, but regardless of what it actually means, the idea is that it separates the water into two parts, so that there is water above the raqia and water below it (v. 7). The waters above are kept at bay so the world can become inhabitable. On the third day (vv. 9-10), the water below the raqia is gathered to one place to form the sea and allow the dry land to appear.

In Genesis chapter 1, we learn the Lord’s process and order of things as He created the earth. After He “divided the awaters which were under the firmament from the waters which were above the firmament”, God began to establish life on earth. Life needs oxygen. In very simple deductive reasoning, the firmament referenced in verse 7 must have led to an oxygen-rich environment that allowed the following verses to be true:

Verse 27 then shows us that “God created man in his own aimage, in the image of God created he him; male and bfemale created he them”. Our first parents, Adam and Eve, were breathing oxygen which scientists (both mainstream and creationists alike) have determined was richer and more pressurized than the environment that we live in today. After all, the waters in the firmament above would have led to a drastically different environment. According to the flood story in Gen 7:11 and 8:2, the waters above were held back only to be released through the â€œfloodgates of the heavensâ€. This is when the earth’s environment began to deteriorate.

Just a few chapters later, we start to see another amazing piece of this puzzle: long lifespans. Genesis 5 tells us that Adam lived to be 930, Mahalalel to 895, Jared to 962, and of course the granddaddy of them all, Methuselah lived to be 969 years old. How is this possible? One major key to answering that question is understanding the ancient atmosphere. Rich, pressurized oxygen is one of the major reasons. Creation Evidence scientists in Glen Rose, Texas have proven this theory time and time again. They even have a variety of life extension patents that have come out of their research. God truly designed our bodies and the original “garden of eden environment” of this earth, to “breathe” life into His children.

We encourage all to do their own research and seek for truth wherever it may be found along with studying God’s word. 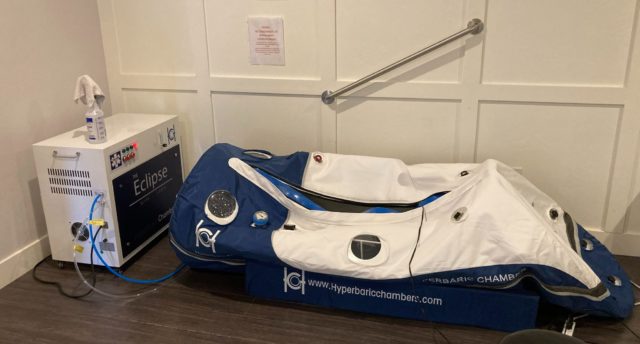 Our ministry has teamed up with a clinic in Lehi, Utah to offer HBOT at a discounted rate for our donating members. A one-hour session breathing pure oxygen inside a hyperbaric chamber may produce amazing results whether you go once a month, or a few times per week. Contact us personally for more information. A Mount Zerin ID card will be necessary to take advantage of this discounted rate.

Mount Zerin Ministries has donated to Health Saves.org, a faith-based Private Membership Association centered around the idea that choosing health can save your life, both physically and spiritually. When we make healthy choices, we aid the body in its natural function of moving toward a state of wellness. Because God created our bodies from the dust of the ground (Genesis 3:19), the materials necessary to keep our bodies well are also found in the ground. These materials come to us in the form of herbs, nutritional and medicinal (Ezekiel 47:12). God is the greatest chemist, therefore, we need not refine or isolate any compound found in any herb (medicinal or nutritional). Rather, we seek to use the foods that God provided in their wholesome state as an act of faith in Godâ€™s omnipotence and omniscience.

At Mount Zerin Ministries, we hope to help HealthSaves in their efforts to seek to provide education, products, and services to their members to help them take care of their health in the way that God intended. We also seek to provide these same things to our members as we work with other organizations such as this one.

More projects with this Private Member Association will hopefully be coming in the future. Stay tuned!

As part of our mission to serve the fatherless, the widows, and the downtrodden, we allocate a portion of the donations that we receive to those who need help paying for medical treatments aimed towards natural healing.

This page contains statements of religious belief and educational information only; nothing on this page is intended to be a medical claim or advice and should not be interpreted as such.